Founded in the 1920’s as Gosford Amateur Cycling Club, this was the beginning of a long history of bicycle racing on the Central Coast. Other clubs formed in and around the same time were:

Woy Woy – “Monday night’s weather was not such as to tempt people away from the fireside, but nevertheless there was a good attendance at Mr. and Mrs. Flaxman’s room when a Woy Woy Bicycle Club was formed to the accompaniment of music by the Jazz Orchestra, some of whom were practising below. Mr. J. Pascoe was voted to the chair, and Mr, Fred Flaxman elected hon. secretary for the meeting. The name of “Woy Woy Bicycle Club” was adopted, on the motion of Messrs Kennard and Reed.  Election of Officers. It was decided that Cr. C. J. Staples be asked to accept the office of Patron, and that leading business men be invited to accept office as Associate Vice-Presidents.Mr. Mr. Pascoe was elected President, on the motion of Messrs T. Maguire and N. Wolf. Messrs W. S. Hadley and C. Kennard were appointed Vice-Presidents; Mr. G. Lawrence proposed, and Mr. F. Flaxman seconded.Other Other officers were elected as follows: Secretary. — Mr. Les. Costello. Treasurer. — Mr. N. Wolf. Captain. — Mr. C. Hines. Vice-Captain. — Mr. T. Reed. Committee. — Messrs G. Lawrence, T. Maguire, and J. Donohue. Membership Fees. Messrs Donohue and Maguire proposed that the annual fee be 5/ for seniors and 2/6 for juniors (17 years and under) . Place and Time of Meetings. Mr. Flaxman offered the use of one of his large upstairs rooms for the general meetings; and the offer was accepted with thanks. General meetings will be held fortnightly, beginning on Friday, July 27. Club Colors. A riding costume of white shorts and maroon jersey was decided on; and samples of a Club badge will be supplied by Mr. Wolf. ” Gosford Times and Wyong District Advocate, Thursday 19 July 1923, page 3

Erina (club colours, black with rose braces), Terrigal (colours not sure but active by the 1930’s)

Racing featured as club or inter-club events in many areas around the area, regularly on Saturdays. Many loops featured as starting at places like Hotel Gosford on Mann St, and there were quite a few temporary tracks built in the area.  Details are scarce but one would assume they were some kind of dirt/gravel crushed down as they talked about having machinery like graders or tractors to create them.

The date of the first meeting and the formation of Gosford Cycle Club:

“The meeting held at the School of Arts on Tuesday evening last for the purpose of forming a motor cycle and cycle club was largely attended, and club was formed. Subscription is 5/per annum, 2/6 on joining, and 2/6 each half year. Mr. Joe Davis (Woy Woy) elected President, Mr Cecil Lewis Hon. Secretary, Mr. W. Ward Treasurer, and Messrs W. Vaughan, H. Moore, J. Eden, F. White, W. Hill, H.McNamara, and C. Dunk, Committee. Mr. W. Watts is official timekeeper, Mr G. Fletcher referee (for cycle races), and Mr. W. Vaughan handicapper. It was decided to affiliate with the N.S.W. League of Wheelmen, and to bank in the Rural Bank.”

And so it was time to race, and many local races featured weekly from the beginning. “Although last Saturday was far from pleasant weather, there being drizzly, rain, eleven cyclists started in the 12 mile race from the Hotel Gosford to Henry’s Hill, finishing at the Hotel (out and back seven times)” 29 April 1926 – Gosford Times and Wyong District Advocate
It was not all smooth sailing back then either, as this letter from Joe Davis, President, Gosford Cycle Club, to the editor shows (many of the lines in this letter seem rather familiar to riders today still): ”

Sir, the decision come to by Erina Shire Council in refusing permission to the Gosford Club to run road races in the Shire area came’ as a bombshell to me and others interested in the sport of cycling. I am simply dumbfounded at the Council’s action in going the whole hog. Had the Council given permission to race outside a certain radius this-would have been drastic enough, but to cut racing right out is the death knell of cycling in the district. As far as my knowledge goes, there is not one town in the Commonwealth where bicycle road racing is prohibited altogether, and most towns and cities, such as Sydney, Newcastle, Parramatta, Goulburn, Bathurst, Lithgow, Maitland, Cessnock, and many other towns, give every encouragement to road racing, both from a business point of view and a winter sport’ and pastime. The danger of cycle racing is infinitesimal., compared to that of motor cars. A ‘”star” bike rider at the most can only do 20 miles an hour, whereas a car very often does from 30 to 40 miles, which is a danger to the community. Most accidents occurring on the’ roads nowadays are due to motor cars, but for a person to be knocked down by a racing cyclist is ? very rare. So why take exception to the poor old push bike? It is the wish of 99 in every 100 people of Gosford and district to see the Gosford Cycle Club carry on, and be an asset to the town, and not be wiped out of existence. The Club today is in a strong position, both financially and otherwise, and the road racing has become very popular with the people of Gosford and district. It seems unbelievable that it was the Council’s intention to wipe the Gosford Cycle Club out of existence, for that is really what it means. In my opinion, it is an unprecedented action taken by any Council in the Commonwealth. Road racing is a splendid exercise and good for the development of a rider, and is conducive to good health. ‘ So why crush a good, healthy sport? During the racing on Saturday afternoons, there has not been one single accident on ‘the part of a rider, or a hold-up of traffic.”  …..   and it continues for a few more paragraphs.

Many clubs were joined together with motorcycles, seemingly due to a common thread of two wheels and being able to source rubber tyres of all types.  They held out and back events, hill climbs, novelty events and various types of individual or handicap races.  Quote from one race meet that Erina Cycle Club ran at Terrigal shows a very different picture than how it is used today.

“Exhibition climbs were given on the Skillion, but on account of the bumpy nature of the ground and the  danger of going right over the top of the cliff, the Committee would not allow a speed climb (Source: Gosford Times and Wyong District Advocate, Thursday 8 October 1925, page 6)

Post WWII Era
The Gosford Cycle Club was reformed after the Second World War in 1950.  Russ Pollock had moved to Narara after a successful riding career in Sydney and competing at the Empire Games.

“With the promised tuition of Mr. Russ Pollock, who is a member of the Gosford Shire Council staff, efforts are to be made to start cycle track racing in Gosford.  Mr Pollock was an amateur cyclist representing Australia at the 1938 Empire Games and, as a junior, represented Australia in competition with French junior champions at Sydney in 1936, He was also champion of the Petersham, Annandale and Camperdown cycle clubs. Mr. Pollock has offered to train Gosford boys in track racing and a meeting to form a club is to be held at Mr. George Baker’s cycle shop, Gosford, next Sunday (December 9) at 2 pm.”  Gosford Times and Wyong District Advocate (NSW : 1906 – 1954), Tuesday 5 December 1950, page 1

In later years the club went alone as the Central Coast Cycling Club then became a financially incorporated association on the 23rd February 1990.

Initially racing was conducted on Saturday afternoons at Gosford showground with a few riders. Road cycling started a couple years later at West Gosford shops then on the Manns Rd circuit in the 70’s, starting and finishing outside the Showground. Peter Parkinson was the club coach (Peter Parkinson Trophy) until his untimely accident while training on the road.

The velodrome at Adcock Park opened on the 18th October 1975.  It was built next to Brisbane Water (on an old tip site) and had a resurfacing in 2010ish….  The track is an odd length at 460 metres, was made to fit the space and has a grass running track inside it.  Improvements to fencing and line markings came in 2019. Maybe not the best track or the straightest, but it sees many regular hard fought battles, especially on Wednesday nights in summer under the leadership of life member Paul Craft, who never misses a night or organising and racing!

Road and Criterium races have continued regularly at venues such as Wisemans Ferry Rd and Peats Ridge Rd area at Calga, Lucca Rd Wyong, and the University of Newcastle campus Ourimbah.  Also since 2018, Cyclocross races have been a regular part of the season, being held at the Matcham Valley Pony Club. Whilst Peter raced all year with Central Coast Cycling Club he lived for 2 races Grafton to Inverell and Goulburn to Liverpool. His goal for each race was to finish. Back then all finishers received a finishers pin and these were his prized possessions. In 1991 Peter finished 1-1/2 minutes outside the Grafton to Inverell finishing time and whilst the organisers were willing to give him the pin he refused it. He was unfortunately killed just before the 1992 race… Peter was struck by a merging truck at Kangy Angy interchange as he rode to work.

Ken was born in Paterson, NSW and has a long palmares which is detailed in the article link below.  Towards the end of his cycling career he moved to the Central Coast and continued to race and train other cyclists.  It’s a great read, take the time to read all of it, one short extract really highlights the sheer commitment he had to cycling…  “In 1934 Ross was selected to captain the New South Wales team for the Victorian Centenary 1000. In preparation for the event Ross planned to ride from his Avoca home to Melbourne. At Gundagai, Ross was hurt in a collision with a car.  A settlement was made with the driver and Ross was paid expenses and was able to claim the £5 appearance money which he lost by not being able to compete in this great event.”

GOSFORD, Sunday. — Mr. R. Darrell, 73 years of age, won the 12-miles senior cycling race at Gosford yesterday, defeating some of his grandchildren who were in the event. The open 50 miles road race at The Entrance was won by D. Walker, who is only 15 years of age.”

Woy Woy Club was white shorts and maroon top.  Quote from 19 July 1923 Gosford Times and Wyong District Advocate article, “A riding costume of white shorts and maroon jersey as decided on; and samples of a Club badge will be supplied by Mr. Wolf. The uniform will be completed, at members option, by a woolen cap in maroon and white.” 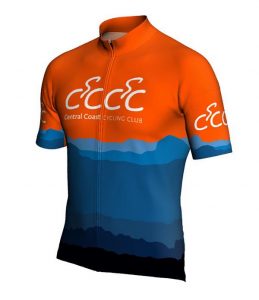 Do you have any more club history information?  Photos?  If you do, or think we missed something, any corrections, please head to our contacts page on the website and get in touch.

Hi Club Members Due to some people being away and illness our meeting tomorrow night will be virtual. Please message me for the link. We hope this will give more members a chance to join and have a say in items effecting your club. ... See MoreSee Less
View on Facebook
· Share